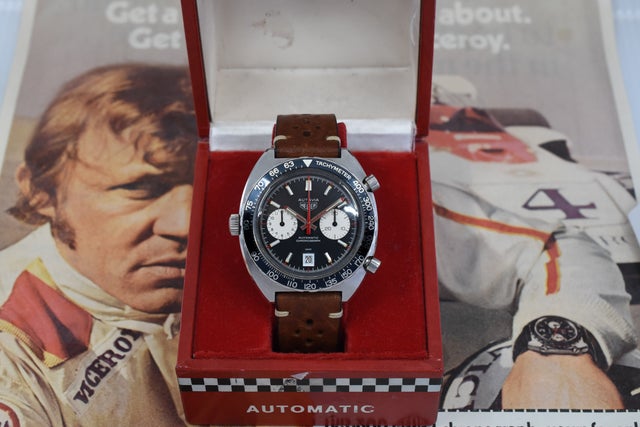 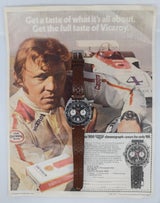 Heuer has cemented itself as a core brand in the vintage watch hobby, and for good reason. With a focus on tool watches, an involvement in motorsports, and quite a few high-profile wearers and ambassadors, Heuer oozes vintage cool, and collectors have noticed, making Heuer sport watches a staple in any serious collection.

The Autavia is the perfect example of a tool watch used for motorsport, and Viceroy's sponsorship of Parnelli Jones' F1 team in the early 70s led to one of the few truly legendary collaborations in the watch world. In 1972, readers of certain magazines were able to send in a clipping from an advertisement with a UPC from a carton of Viceroy cigarettes to receive a special Heuer Autavia in colors matching Viceroy's bright red branding. Approximately 5,000 of these models were produced in total and are becoming increasingly sought after as collector-worthy examples disappear into safe deposit boxes.

This watch has a 2729XX serial number indicating late 1972 or early 1973 production and is considered part of the last, sixth “batch” of the Viceroy models. This Viceroy Autavia is completely original and appears in unpolished condition.

Our 1163V comes with a very lightly worn brown rally-style strap and an original 1972 magazine ad featuring the original Viceroy promotion through which the watch could be ordered. This is not a reproduction or a copy but an original magazine clipping from 1972. The rare original racing-inspired box is also included as pictured.

This watch comes from my personal collection and has been a display piece with the original box and magazine ad. It's been seldom worn over the last few years, but it was serviced in 2020 and was worn very sparingly since. I've owned the watch since 2015

Condition is per the photos and as follows:

Bezel: Original bidirectional tachymetre bezel in very good condition as shown in the photos. The insert is very clean with a couple spots of wear as shown, and the bezel action is crisp.

Dial/Hands: Original black dial with polished steel markers with white inserts. The tritium is complete and has aged to a creamy patina. Hands are original stainless steel with red accents and narrow tritium portions.

Movement: Heuer caliber 11 automatic chronograph movement with all functions working correctly including start, stop, and reset to zero of the chronograph. The movement keeps excellent time and was serviced in 2020.

Accessories: Included is an original 1972 magazine ad featuring the original Viceroy promotion through which the watch could be ordered. This is not a reproduction or a copy but an original magazine clipping from 1972. The original racing-inspired box is also included as pictured.