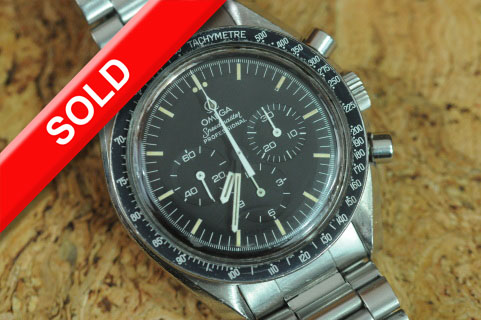 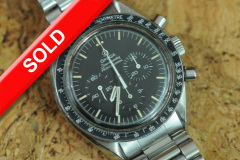 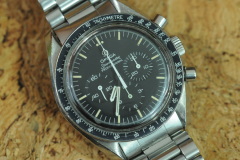 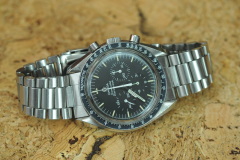 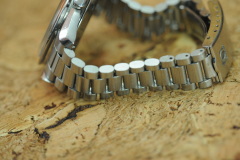 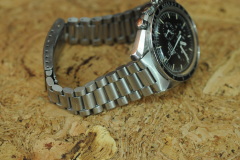 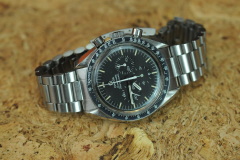 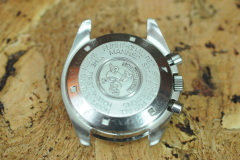 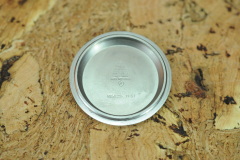 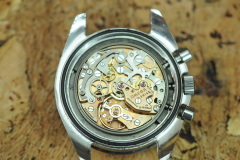 SKU:
$0.00
Unavailable
per item
We're extremely  proud to offer an incredibly unique example of the Omega Speedmaster Professional Moonwatch. No watch has a history as rich as the Omega Speedmaster, and unfortunately since none of us are likely to set foot on the moon, as watch enthusiasts we wish to live vicariously through the watches strapped to the outside of a NASA spacesuit. This example will bring you one giant leap closer to actually being a part of the action.
This Speedmaster was originally purchased in 1972 by a United States Air Force Staff Sergeant at the base exchange at Patrick Air Force Base in Florida. The owner was working with NASA as a communications specialist on the Apollo 16 mission, the last manned mission to the moon (and where the astronauts were also wearing Speedmasters). The watch was purchased as a souvenir of the original owner's involvement in such a historic project, and remained in his possession until we acquired the piece. A signed affidavit accompanies this piece verifying its provenance.
The watch has been worn daily but well cared for throughout its life.
Case: 42mm case in good vintage pre-owned condition. There are minor surface scratches throughout but no deep dings, gouges or scratches in the case.

Bezel: Original bezel in good condition with only minor wear and missing paint as shown.

Dial/Hands: Original tritium dial whose markers have faded to a cream patina. The hands are Flightmaster hour and minute hands replaced very early in the watch’s life by its original owner. We have kept these hands as is, as it just adds to the story of the watch’s life.

Caseback: Moon landing caseback with a shallow inscription from the original owner around the perimeter.

Crystal: Original acrylic crystal which has a shallow crack near the 8 O’clock marker. A brand new sealed OEM Omega crystal will be included with the watch.

Movement: Caliber 861 hand wound chronograph movement in excellent condition and keeping good time with all functions working as they should. The chronograph resets to zero.

Accessories: A signed affidavit from the original owner verifying the watch’s provenance.