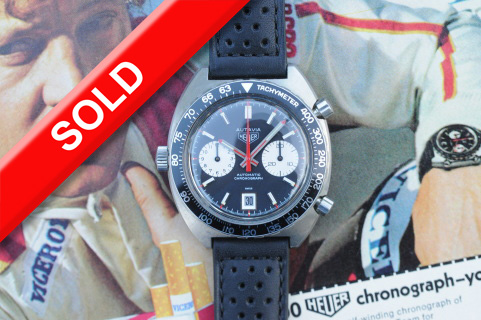 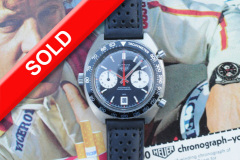 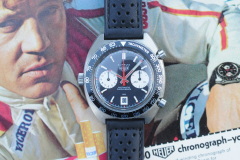 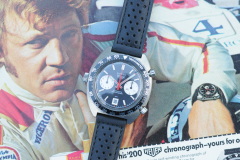 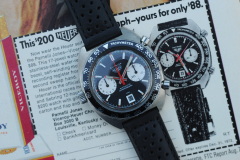 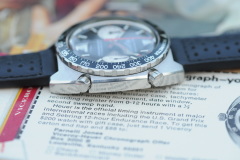 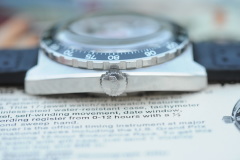 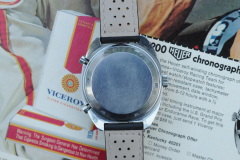 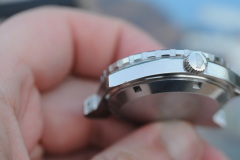 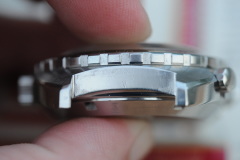 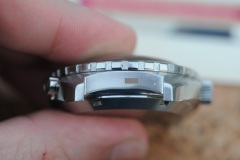 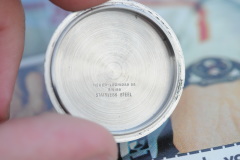 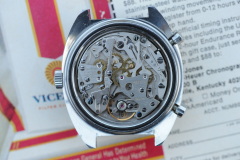 SKU:
$0.00
Unavailable
per item
Heuer has cemented itself as a core brand in the vintage watch hobby, and for good reason. With a focus on tool watches, an involvement in motorsports, and quite a few high profile wearers and ambassadors, Heuer oozes vintage cool, and collectors have noticed, making Heuer sport watches a staple in any serious collectuion.
The Autavia is the perfect example of a tool watch used for motorsport, and Viceroy's sponsorship of Parnelli Jones' F1 team in the early 70s led to one of the few truly legendary collaborations in the watch world. In 1972, readers of certain magazines were able to send in a clipping from an advertisement with a UPC from a carton of Viceroy cigarettes to receive a special Heuer Autavia in colors matching Viceroy's bright red branding. Approximately 5,000 of these models were produced in total and are becoming increasingly sought after as collector worthy examples disappear into safe deposit boxes.

Condition is per the photos and as follows:

Case: 42mm stainless steel case which appears unpolished with the radial brushing still visible. Case surface has numerous light surface scratches as shown. Original case chamfers are present and sharp. Polished sides show minor wear as shown in the photos. There is a moderate ding on the bottom of one of the lugs which has been highlighted in the photos.

Bezel: Original bidirectional tachymetre bezel in very good condition as shown in the photos. Insert is very clean and bezel action is crisp.

Dial/Hands: Original black dial with polished steel markers with white inserts. The tritium is complete and has aged to a creamy patina. Hands are original stainless steel with red accents and narrow tritium portions.

Crystal: New replacement acrylic crystal just installed. OEM crystal can be included but is cracked and crazed and not salvageable.

Movement: Heuer caliber 11i automatic chronograph movement with all functions working correctly including start, stop, and reset to zero of the chronograph. The movement keeps excellent time.

Accessories: Included is an original 1972 magazine ad featuring the original Viceroy promotion through which the watch could be ordered. This is not a reproduction or a copy but an original magazine clipping from 1972.